2016 December - From the Registrar's Desk

The Annual Report for 2016 is available from our website (Resources).  I would particularly like to thank Mark Simpson this year for providing the amazing photos.  Well worth a look if only for the photos.

This publication is all completed in house and we are able to keep the costs to just a few dollars for the two copies (black and white) required by parliament.

In addition, if you haven’t found it yet there is also a Statistics page under the Resources tab of the website which provides summaries of some registration, licensing, complaint and CPD data.

It is probably not the most attractive section to a veterinary audience but the Annual Report also contains the audited financial statements of the Board.  These are also issued separately to the profession each year with the notice of the Annual General Meeting. 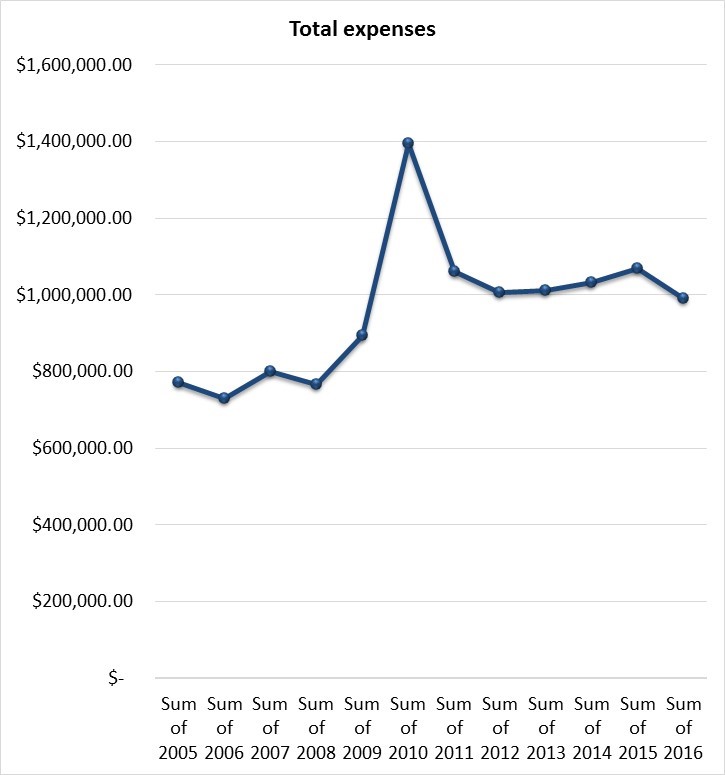 Looking at the finances for the financial years 2005 to 2016, total expenses for the Board (Figure 1) have risen by 2.3% on average per annum.  For the period 2013 to 2016 average annual expenses have fallen by -0.5% per annum despite employment of a Hospital Inspector (previously the roles of Registrar and Hospital Inspector were combined), implementation of the hospital inspection program, and significant updates and improvements to the website and office equipment during this time. Average CPI increases over this period were 2.0%.

For the period 2005-2016 revenue grew by an average of 1.3% per annum.  Revenue has been significantly affected over this time by falling interest income (average -9.0% per annum).

Legal costs are the most unpredictable and potentially the greatest expense the Board faces each year and were responsible for the peak in Figure 1.

The Board’s strategy is to maintain the real value of its accumulated funds at approximately twice its annual expenditure to ensure it is able to prosecute and defend any future actions. In order to achieve this strategy the Board has resolved to increase fees payable by veterinarians aligned with CPI increases.

Finally, as another year passes by I would like to take this opportunity to thank Mary, Clare, Des and Glenn for their on-going hard work and support over the last year.

Wishing you a safe and Happy Christmas.