History of the Board 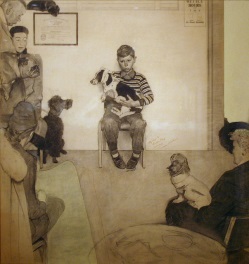 A Little of the History of Registered Veterinary Surgeons in NSW

When the Veterinary Surgeons Act 1923 was proclaimed there were two ways you could become a veterinary surgeon in NSW:

The History of the Veterinary Surgeons Board NSW 1924-1975 compiled by veterinarian John Beardwood and the minutes of Board meetings give us an insight into the early days of the profession in NSW.

The first Board was chaired by the Chief Veterinary Surgeon Mr Max Henry. Other Board members included veterinary surgeons Professor J.D Stewart and Colonel A.P Gribben; two non-graduates who were eligible to be registered Messers Edgar Hamilton and M.P Dunlop; and two members of the stockowners’ organisations.

The first year saw 37 meetings of the whole Board and many visits to country towns. In all 130 applicants were interviewed, some more than once, and at the end of the first year there were 279 approvals for registration and 86 refusals.

Mr Edgar Alexander Hamilton, a member of the first Board, was given Registration Number 2 and this file is luckily still in the hands of the Veterinary Practitioners Board.

Edgar was born at Guntawang (near Mudgee) NSW on 31 October 1877. Guntawang has its own place in NSW colonial history as the home of the Rouse family from 1825. He became a stock inspector based at Moss Vale and was in this position for 10 years. He became a registered veterinary surgeon, satisfying the 1923 Act (section 13 2(f)), by holding the Certificate of the Stock Board of Examiners issued under the Pastures Protection Act 1912. The Board records show in later life Edgar lived in the Chatswood area of Sydney and died on 25 February 1955.

In September 2013, Trent McCarthy was registered as a veterinary practitioner with the number N10000. Trent was raised on the northern beaches of Sydney although spent many teenage years living in Fiji where he was involved with the SPCA. Before entering Charles Sturt University (CSU) Trent also worked as a volunteer with Assistance Dogs and Riding for the Disabled. Following graduation from CSU in August 2013, Trent began working as a mixed animal practitioner at the Dungog Veterinary Hospital.

Find a Vet or Hospital

Login and change your details or check your CPD

Find a Vet or Hospital

Keep up to date with news from the Veterinary Practitioners Board

Login and change your details or check your CPD