Introduction of non-native animals to Australia 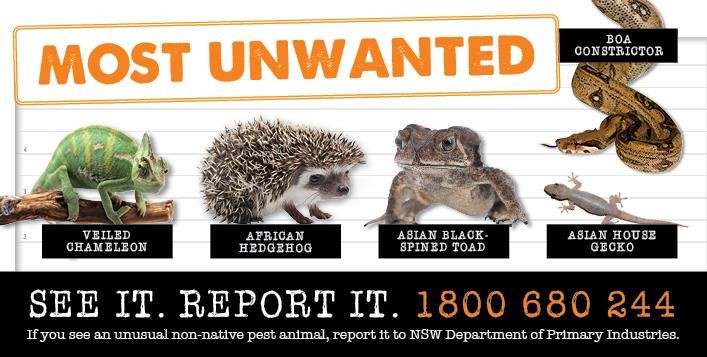 Non-native animals, also known as non-indigenous animals, have been introduced to Australia from the time of the arrival of European settlers. The first settlers brought with them commercially important livestock including pigs, goats, cattle, rabbits and horses. However, feral populations of these species developed and spread after being deliberately released or escaping from captivity. Over time, additional non-native animals have been introduced to Australia through legal, illegal and accidental pathways. Some of these free-living non-native pest species, such as the European starling, Cane toads, European fox, feral pigs, goats, cats and rabbits, have had a devastating impact on our environment, economy and community.

Certain non-native animals haven’t established free-living populations yet, but if they did they could impact negatively on the natural environment and commercial enterprises through predation, competition for food and shelter, destruction of habitat, and by potentially spreading exotic animal diseases. In addition, some non-native animals could threaten human health and safety through the transmission of diseases or causing vehicle accidents. These animals enter New South Wales through a combination of pathways such as accidental hitchhikers on ships and planes; illegal importation, illegal trade within Australia and escaping from illegal keeping. Information on key non-native species can be accessed from the following link to the NSW Department of Primary Industries (DPI) webpage.

A list of non-native terrestrial vertebrate species can be accessed from Schedule 3 of the Biosecurity Act 2015 (the Act). Species listed in Part 2, Division 1 and Part 3 of the Act are considered to be ‘prohibited dealings’.  It is an offence to keep, move or otherwise deal with these animals unless the dealing is permitted by NSW DPI. Species listed in Division 2 of the Act are non-native species that are usually kept as domestic pets, livestock or are already widespread pests and therefore, are not considered to be ‘prohibited dealings’. Additionally, as a safety-net, any non-native terrestrial vertebrate that is neither listed in Schedule 3 or 4 of the Biosecurity Act is considered as a ‘prohibited dealing’.

How can you help??

1.  If you become aware of unusual animals in the wrong place or suspect illegal activities such as the movement, keeping, breeding and sale of unusual non-native animals, you should make a confidential report to NSW DPI as soon as possible.

To report the sighting of an unusual non-native animal being kept illegally or released into the environment, please contact NSW DPI via:

For further information about the non-native species that are prohibited in NSW please:

Where you can access a photo library of some of the key non-native pest animals.

Copyright notice the images (above) are owned by NSW Department of Primary Industries (DPI) larger images and additional photos can be viewed on the DPI website.

2.  Help NSW DPI reach as many people as possible with the ‘Most Unwanted’ campaign to encourage the people of NSW to look for and report non-native pest animals. We have created a digital promotion pack including social videos, a poster and brochure for you to use to spread the word to your clients.

Due to the large size of files, please access the relevant materials via the Dropbox folder. If you are unable to access Dropbox, please contact us with an alternate file sharing system.

In order for us to track our reach to stakeholders, please always use the hashtag #DPIseeitreportit and tag us on Facebook @NSWDPI.Biosec

If you would like to request posters and brochures to be sent to your vet hospital, please email bfs.communications@dpi.nsw.gov.au