Home › issue 50 - has an unusual non-native animal been handed in to your clinic?

Issue 50 - Has an unusual non-native animal been handed in to your clinic? 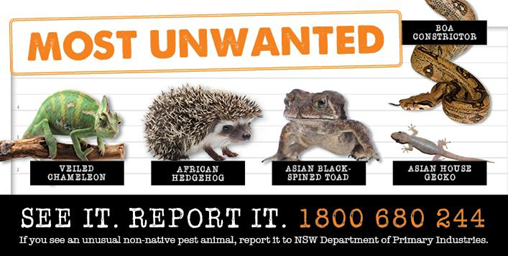 Why are vets being asked to assist in managing pest animals?

Because veterinary practitioners are often involved in looking after the health and well-being of people’s pets, they are occasionally called upon to treat unusual non-native (or non-indigenous) species. Certain non-native animals are classed as ‘prohibited dealings’ and regulated in NSW to ensure their biosecurity risks are appropriately managed.[1] For this reason, if you become aware of unusual animals in the wrong place or illegal activities such as the unlicensed movement, keeping, breeding and sale of prohibited dealing non-native animals it is important that the NSW Government is notified as soon as possible. Your action could help to protect the NSW environment, economy and your local community from the negative impacts of introduced pest animals.

Balancing a vet’s responsibilities and obligations

Veterinarians often have to balance a variety of responsibilities and obligations when determining the most appropriate course of action to take with respect to the animals in their care. The Veterinary practitioners code of professional conduct covers responsibilities including professional conduct and client confidentiality whilst legislation such as the Biosecurity Act 2015 (NSW) includes obligations for vets to inform authorities of notifiable diseases.

Under section 152 of the NSW Biosecurity Act 2015, it is an offence for a person, (including a vet) to keep, have possession, care, or otherwise deal with a prohibited dealing animal. For this reason, vets are asked to balance their professional and legal obligations when becoming aware of or treating prohibited dealing non-native animals. Options for appropriate action from a vet include:

To access an infographic with instructions for vets to use if you have had an unusual non-native animal handed into your vet hospital or for brochures or posters, please click on this dropbox link.

What are the risks?

On mainland Australia, at least 73 non-native animal species have established wild populations including 25 mammal species, 20 species of birds, four species of reptiles, one amphibian species and at least 23 freshwater fish species.[2] Notable examples of non-native pest animals that have established invasive populations in Australia include the cane toad, fox, cat and rabbit. The impact of established non-native animals on Australian agriculture alone is estimated to be greater than $1 billion per annum through impacts including disease transmission, predation and competition for resources. However, there are many other less common non-native animals which can have adverse biosecurity impacts on our environment, economy and communities so, effective management of these animals is crucial.

The list of non-native animal species classed as prohibited dealings includes mammals, reptiles, amphibians and some birds. It is illegal to keep prohibited dealing species in NSW without an appropriate licence and penalties for breaches include heavy fines and imprisonment.

Movement, keeping, breeding and sale of any prohibited dealing non-native species without the appropriate authority can be reported to NSW DPI via the following online report form: www.dpi.nsw.gov.au/biosecurityreport or alternatively by telephoning 1800 680 244. Protecting wildlife, agriculture and the community from invasive pest species is crucial for the long term health of the environment and the NSW economy.

Further information is available by contacting NSW DPI at www.dpi.nsw.gov.au 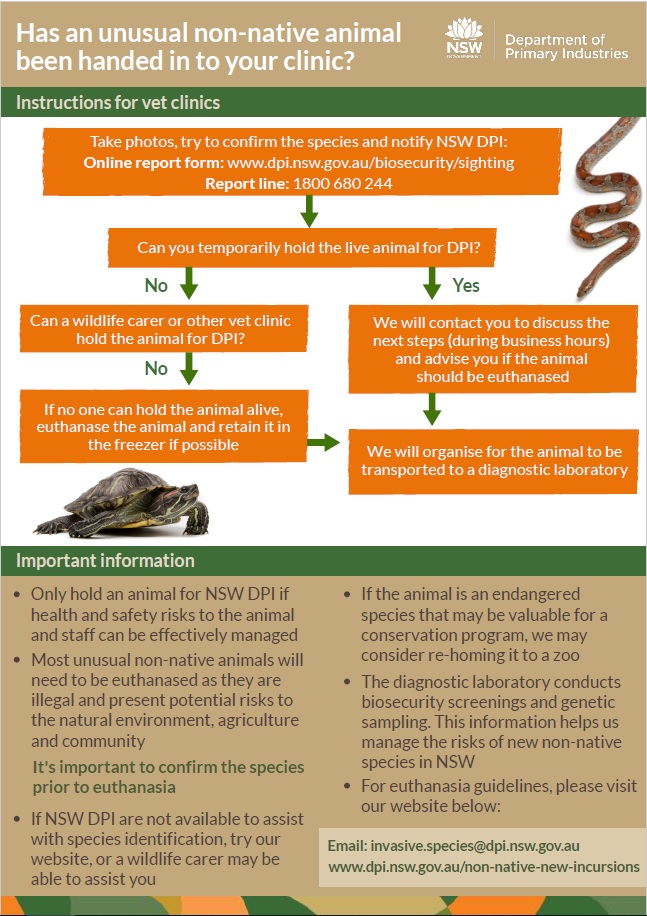 [3] A comprehensive list of prohibited dealing non-native animals and details on their management is available via the following link NSW DPI.